Purity: that’s often what most beautiful ideas are made of. A straight line, a clear path of reasonning, and what originally seemed intricate or odd then becomes evident. Israel Galván went to the Romanes Tzigane Circus looking for a place to deliver his solo as you may find a place to deliver your luggage, as a pianist approaches an unknown piano.Intuition? Enthusiasm of new encounters? What he found was much more than he ever expected.
The unconventional combination became natural, and the circus of hazard turned out to to be, in its own way, familiar territory. The deep roots of the Gipsy Internationale reach beyond times and borders, and inside this famed Parisian Tzigane stronghold, Gipsy Galván realized he was alone no more. So he asked a loyal partner to join him – his friend Caracafé – and created a show with the complicity of the Romanes family, integrating with fluidity their sense of community to his loneliness. In this new fortuitous environment, he brought some old acquaintances: the rocking chair from Arena, the “earthquake” floor from El final de este estado de cosas, the inside of the piano laid on the floor in La Fiesta… An old world used to create a new one, a turnover of gigs, where to make fun of tragedies and virtuosity alike, and embark, in the intimacy of a family, the into most absurd challenges: stop windmills in their tracks, start a bullfight with cats. (Lola Gruber) 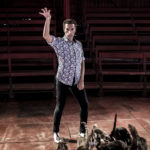