Born in Sevilla, Spain, into the dancing family of José Galván and Eugenia de los Reyes, Israel Galván underwent classical flamenco training but since his first creation ¡Mira! / Los zapatos rojos (1998), that paves the way for a manifesto for a new spirit of flamenco dance, he has gradually transformed into un unclassified dancer and choreographer. Galván recodifies the physical language of flamenco, using not only modes of expression genealogically close to it, such as bullfighting, but also performative aspects of other rituals of popular culture, from football to activism and cross-dressing. He produces a multiplicity of bodies for a flamenco that is itself going through a process of change. Each of his creations*** is to be a milestone in his pursuit of a dance that seeks to free itself from certain features inherited from a crystallized flamenco. He wants to refocus dance on the actual act of dancing.

Israel Galván was honoured with the most prestigious prizes such as the Premio Nacional de Danza (Spain), the New York Bessie Performance Award, the National Dance Award for Exceptional Artistry (UK). In 2016, he was promoted to the rank of Officier dans l'Ordre des Arts et des Lettres in France.
Israel Galván is also featured in a Netflix docuseries about dance called Move. He is an associated artist at Le Théâtre de la Ville, Paris. 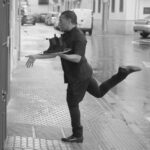