An art installation with film

For the past four years, iconic Belgian artist Jan Fabre and legendary performer Mikhail Baryshnikov have worked together on their first collaboration. British artist Phil Griffin joined them for the realization of the film of NOT ONCE.

Of Mr. Baryshnikov, Jan Fabre says, “I first met him in 2009. I was struck by his incredible hypnotic blue eyes
and his gentle personality. Before we met, I had seen Mr. Baryshnikov dance in many documentaries, and I saw a dancer who is more than just a dancer. I saw a contemporary performer who gave spiritual weight and meaning to movement, and by that reason content. Years went by, and I was lucky to see Mr. Baryshnikov perform live in Manchester. I thought immediately that my theatre text NOT ONCE. would be something for him because I saw a performer in action who embodies the ancient idea of metamorphosing and transforming into something else. We had great days working together in Antwerp. Mr. Baryshnikov is a stubborn and very detailed artist. Exactly what I like.”

Based on a monologue written by Jan Fabre, NOT ONCE. unveils – through eleven imaginary rooms of a photographic exhibition – the platonic relationship between the subject and a female photographer who, for years, has manipulated his body and reworked it into different entities. The multimedia work is conceived for film and explores the relations between an artist, his work and life, his public, and ultimately, the balance between giving and taking – between dependency and independency.

Mr. Baryshnikov says of the collaboration: “I’ve lived a long life, but never thought that one day I would be part of a museum installation. It’s a first for me. I’ve known Jan Fabre as a visual artist for many years, and have been acquainted with his work. When I visited Troubleyn Laboratorium in Antwerp I was surprised and flattered when Jan proposed this project. He told me he had a challenging text in mind, which intrigued me – why this text, and why me? I now think he can answer that question better than I can, but working with him has been
an intense and fascinating experience. He works like a painter, throwing ideas in, trying things, fearless experimentation. I’ve never worked like that before. I hope that Jan got the canvas he wanted.”

For the film of the art installation Jan Fabre invited the British artist Phil Griffin as co-director.

Jan Fabre says of the collaboration, “I’ve known Phil Griffin since 1987 when he performed one of the knights in the first dance performance I created: Das Glas im Kopf wird vom Glas. In 2014 Phil returned to his artistic roots to capture the creation process of Mount Olympus – to glorify the cult of tragedy (a 24 hour performance). At night we had long conversations about the nature of my work and my artistic drive. It resulted in the artistic documentary Surrender, a film that I treasure highly since it is a truthful, uncensored, straightforward, hard, but loving report, on how we live and breathe our artistic work at Troubleyn. And since
I like to continue collaborations and deepen them, I asked Phil to join me in creating the film of NOT ONCE.”

Conceived and designed as an art installation with film, this new creation will be presented in museums and possibly in proscenium theatres worldwide in 2020.

Jan Fabre (Antwerp, 1958) is considered one of the most innovative and versatile artists of his days. Over the past 30 years, he has produced works as a visual artist, theatre maker and author. In the late 1970s, the young Jan Fabre caused a sensation as a performance artist. In 1982, the work This is theatre like it was to be expected and foreseen and two years later The power of theatrical madness challenged the foundations of the European theatre establishment. Chaos and discipline, repetition and madness, metamorphosis and the anonymous are indispensable ingredients in Fabre’s theatre. The body in all its forms has always been a central object of his research.Productions such as Je suis sang, Angel of Death, Quando l’uomo principale è una donna, Orgy of Tolerance, Preparatio Mortis and Prometheus-Landscape II have earned Fabre international acclaim. In 2005, Jan Fabre was artiste associé of the Festival d’Avignon. He then created Histoire des Larmes for the cour d’honneur, where he had already performed Je suis sang in 2001 and a retake of Je suis sang in 2005. In 2007, Jan Fabre created Requiem für eine Metamorphose for the Felsenreitschule of Salzburg. His latest performances, the impressive Mount Olympus. To Glorify the Cult of Tragedy. A 24-hour performance and Belgian Rules/Belgium Rules are still touring internationally. As an author, he has written several theatre texts that were translated worldwide, including We need heroes now, Another sleepy dusty delta day, I am a mistake, A tribe that’s me, the King of Plagiarism, Etant donnés… For Mount Olympus he wrote several texts about sleep and dreams: Remnants. Over the years, Jan Fabre has also built up an exceptional oeuvre as a visual artist. He has become well known to a wide audience with the Tivoli castle (1990), Heaven of Delight (2002), in which the ceiling of the Mirror Room at the Royal Palace in Brussels is drawn with jewel beetle wing-shields, his open-air sculptures, including The man who measures the clouds (1998), Searching for Utopia (2003) and Totem (2000-2004). Key solo exhibitions by the Belgian artist include: From the Cellar to the Attic – From the Feet to the Brain (Kunsthaus Bregenz, 2008; Venice Biennale, 2009), The Hour Blue (Kunsthistorische Museum Vienna, 2011), Pietas (Venice Biennale, 011) and Stigmata. Actions and Performances 1976 – 2013 (MAXXI, Rome, 2013; M HKA, Antwerp, 2015; Lyon, 2016; Leopoldmuseum, Vienna, 2017; CAAC, Sevilla, 2018). Jan Fabre was the first living artist to present his work at the Louvre, Paris (L’Ange de la metamorphose, 2008). He was invited by the State Hermitage Museum in St-Petersburg to create a large-scale exhibition in 2016.That same year, Jan Fabre presented Spiritual Guards at three historical sites in Florence. In 2018, Fabre presented his research to date on the brain at the Fondation Maeght and exhibited a challenging selection of new and rarely seen works of art during Jan Fabre. Ecstasy & Oracles’ (Monreale – Agrigento, Sicily). Among recent projects we can mention Oro Rosso, Gold and coral sculptures, blood drawings, which opened in 2019 on several locations in Naples and The Man Who Measures The Clouds (Monument to the Measure of the Immeasureable) in Venice, installed by the Garden of Palazzo Balbi Valier and visible from the Grand Canal. 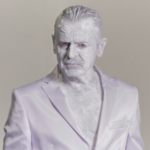 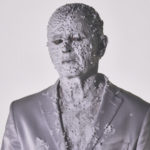 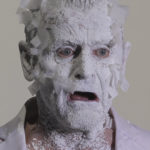 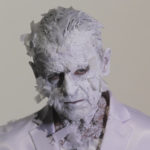 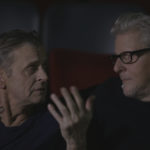 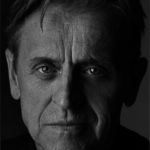 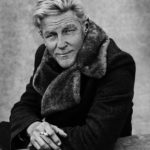