“Sei Solo. a Violino senza Basso accompagnato” is the title of six pieces for violin solo that Bach wrote in his early years (1713-1720). In – Incorrect – Italian, “sei solo” means “six solos”, but it also means: “You are alone.” These pieces are a very intimate dialogue of the composer with himself and with God. They are also a field of experimentation in form and harmony and a study of many different techniques how to play the violin. In the same time, they are virtuoso showpieces for Bach himself to be performed in front of a noble audience of connoisseurs many of whom could play the violin themselves.

The six pieces are accurately written down in one of the most beautiful calligraphies among Bach’s manuscripts. They are put together in a meticulously meditated order not necessarily corresponding with their dates of creation. The structure is composed of three interchanging sets of two alternating forms: Italian style “Sonata da chiesa” with usually four movements, fast-slow-fast-slow (meters 4/4 – 4/4 – 3/4 – 3/4) and French style “Partita”, a suite of characteristic dance movements (four up to seven different types).

Each sonata & partita has a high peak. The whole set of six has its high peak in the last movement of the second partita, the famous “Chaconne”; this movement is as long as all other four of this partita together and by far the longest movement of the whole set: some 16 minutes, the duration of the others varying from 1 to 8 minutes. Based on very simple musical material, it explores “where the tones want to glide” in any possible way. The “Chaconne” is a turning point in many ways: up to this movement all pieces are mainly in minor keys conveying a serious, thoughtful, sometimes sad or melancholic mood; in the middle of this piece the melody turns to a major key. Also the two last sonatas (sonata no. 3 + partita no. 3) are in major keys. The atmosphere becomes less heavy, more festive, gay.

For Jennifer Koh this change of mood is linked to a specific moment in Bach’s life as a young composer, teacher, organist and violinist in Weimar and Köthen (1713-1720) when he was in his thirties and newly married – an emerging artist, more and more self-confident, strong in his (protestant) believe but not so much busy with church music (like in his later Leipzig years). After Bach had been appointed concertmaster at the court of Köthen he accompanied the Prince of Köthen-Anhalt to the spa in Karlsbad. In his absence his wife suddenly died which he learned only upon his return: The house is empty; she is already buried. He is 35. The “Chaconne” could be seen as Bach’s struggle to overcome this personal tragedy.
– Konrad Kuhn [dramaturg]

“Bach observed the river of tones that must have been floating constantly through his mind in order to explore the movements of the lines these tones would form. Where did these tones want to glide? That’s what he was discovering. In the sonatas and suites for violin solo even a musical layperson can recognize Bach’s capacity to watch the live of the drives [in the sense of the term introduced by Sigmund Freud in his ‘Drive Doctrine’] that the tones develop down to the subtlest ramification. For any musician, these pieces offer experiences valuable for a lifetime: to feel what is hidden in the tones, in their ability to enter in contact with other tones and form chords.”
Hellmuth Kühn (German writer) 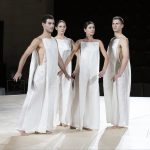 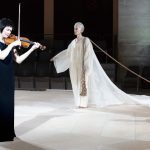 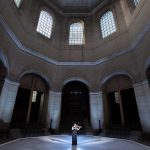 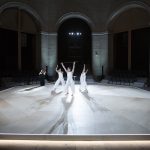 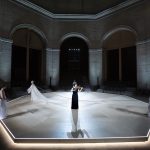 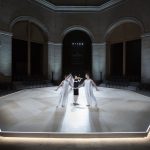 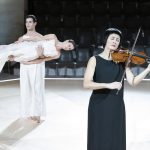 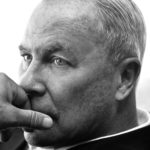